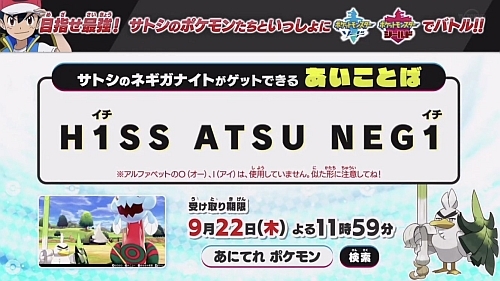 A limited-time distribution of Sirfetch'd was announced for Pokémon Sword and Pokémon Shield during the September 9th broadcast of Pokémon Journeys: The Series (Pocket Monsters) in Japan. This Sirfetch'd is based on the Sirfetch'd used by Ash Ketchum in the World Coronation Series. Players can redeem this Sirfetch'd using the code「H1SSATSUNEG1」. This code can only be redeemed until September 22nd.

How to receive the Sirfetch'd via Mystery Gift:
This distribution is the forth of a series of distributions of Ash's Pokémon. The next Pokémon, Lucario, will be distributed starting September 16th.
The Original Pokémon Wiki
40,000+ pages
Over 3m edits
Browse now
Community