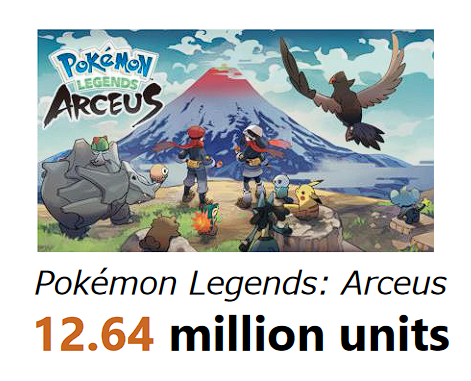 After the madness of the holidays, the January-March quarter is typically much slower for consumer products, with things typically slowing down following any initial New Year's sales. But if Nintendo's taught us anything over the years, it's that it's not a typical company. Nintendo's latest quarterly investor briefing has revealed that their January-March quarter has seen a solid improvement over the previous year, with much of that improvement owing to the continued strong performance of the latest entries in the Pokémon franchise.

The Nintendo Switch sold a respectable 4 million units worldwide over the January-March quarter, with the sales largely split between OLED (1.81 million) and regular (1.77 million) models, with interest in the Switch Lite dipping back down after a solid holiday season (0.53 million, down from 1.34 million). This brings overall sales of Nintendo Switch consoles over 107.5 million units worldwide. While the overall sales of 23.06 million units for the Japanese financial year (April 2021-March 2022) were down roughly 20% from the previous year, this figure represents solid performance for a console that celebrated its 5th anniversary during this quarter, particularly in the middle of global chip shortages that have been plaguing other console makers, and which have prevented the kind of price drops we might have typically seen with past consoles hitting this age. Nintendo is forecasting sales of another 21 million Switch units during the 2022-2023 financial year, which suggests that the release of a new successor console is still quite some distance away. Interestingly, Nintendo President Shuntaro Furukawa declined to answer questions regarding if Nintendo will introduce a new Switch model this year, despite having given explicit denials to similar questions in the past. Several industry journalists and analysts have speculated this lack of denial, together with these sales forecasts, could indicate that Nintendo intends releasing a new Switch model during this financial year. 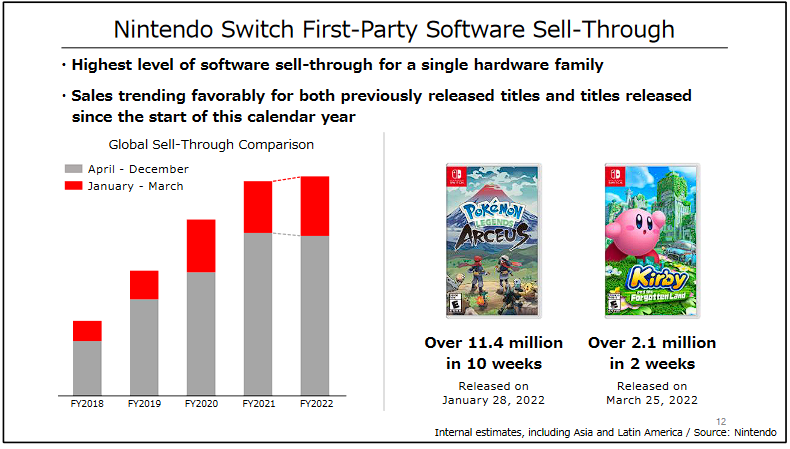 The breakout hit for this quarter is of course Pokémon Legends: Arceus. The game's sellthrough of 12.64 million units worldwide in the approximately two months between the game's release and the end of March doesn't quite match the Pokémon Brilliant Diamond and Shining Pearl's initial success in the holiday quarter, however this game also didn't have the advantage of being a remake of beloved classic titles. All in all, this bodes well for the Pokémon Legends series, and we hope the franchise will continue making future spin-off games on these same lines.

Speaking of Pokémon Brilliant Diamond and Shining Pearl, those titles have seen a significant drop off in sales over this quarter, shifting only roughly 680,000 units worldwide, bringing total sales up to 14.65 million units. These new figures mean that the titles are now officially the best-selling remakes in the history of the Pokémon franchise, beating the previous record holders Pokémon Omega Ruby and Alpha Sapphire, which sold approximately 14.46 million units over their lifetime. It'd be a fair assessment however that much of Brilliant Diamond and Shining Pearl's initial sales momentum may have been cannibalized by the launch of Pokémon Legends: Arceus. Strong initial sales suggested that the titles could be on track to out-sell Pokémon Diamond and Pearl's combined lifetime sales of 17.67 million copies worldwide. These new figures, in combination with the announcement of Pokémon Scarlet and Violet for later this year, paint a very different picture, and it seems like that target may now be well out-of-reach.

Pokémon Sword and Shield also saw weaker growth, selling roughly 380,000 units over January-March, bringing the series up to 24.27 million as of the end of the Japanese financial year, and retaining their spot as the 5th best-selling Nintendo Switch games, after Mario Kart 8 Deluxe, Animal Crossing: New Horizons, Super Smash Bros. Ultimate, and The Legend of Zelda: Breath of the Wild. Between the tapering off of sales, and the announcement of Pokémon Scarlet and Violet, it now seems increasingly unlikely that these titles will overtake the original Pokémon Red, Blue, and Green, which sold roughly 31.05 million copies in the original Game Boy release, but they have at least for now solidly cemented their place as the 2nd best selling Pokémon titles of all time.
The Original Pokémon Wiki
40,000+ pages
Over 3m edits
Browse now
Community