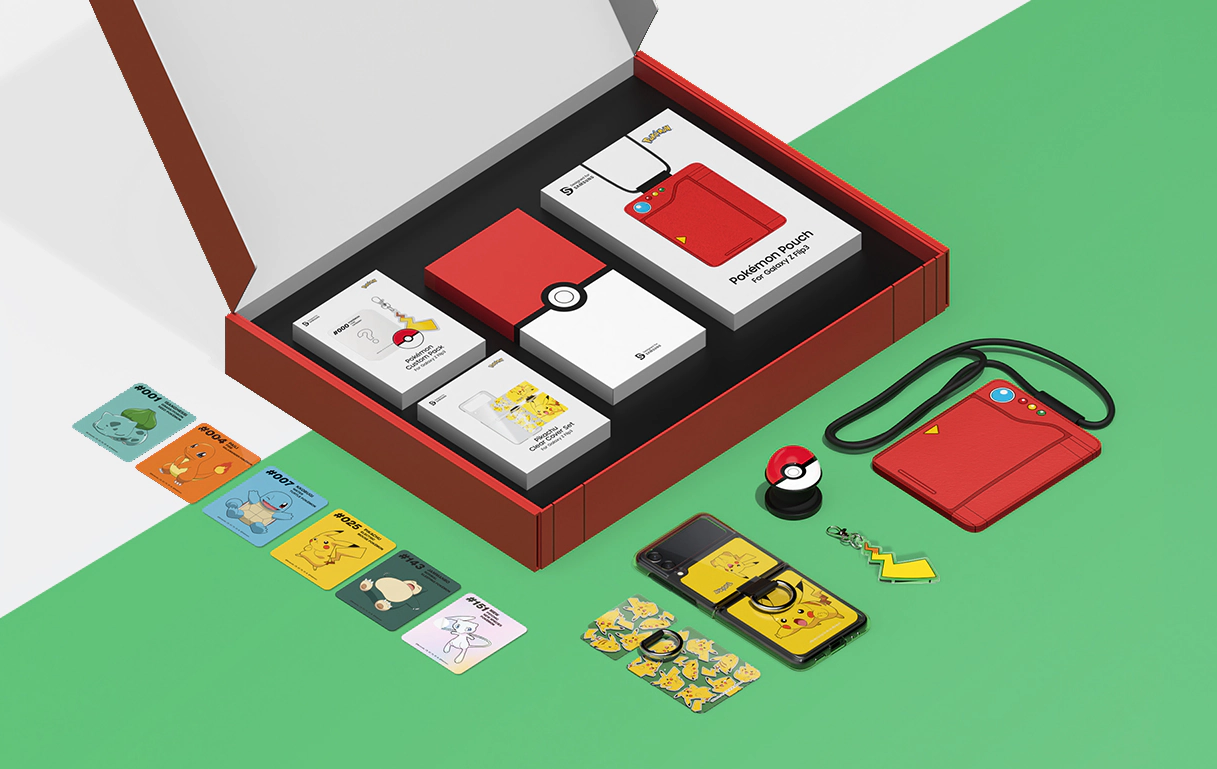 The Galaxy Z Flip 3 was one of South Korea's best selling phones of 2021. So it's somewhat surprising that Samsung's latest collaboration, a new Pokémon-themed special edition of the Galazy Z Flip 3 phone, was announced with such little fanfare yesterday on Samsung's South Korean website.

Remarkably little is known at this stage about the specifics of this collaboration outside of a single image, which shows the phone being packaged together with a set of Pokémon themed accessories in a large red (possibly Pokédex themed) box. These accessories include a Pokédex-themed lanyard style pouch for the phone, a clear phone case that can be customized with one of two included Pikachu designs, and a Poké Ball-themed phone grip (known as a grip tok in South Korea), a Pikachu keychain. The image also shows a set of 6 Pokémon cards showing Pokémon from the first generation, however it's not entirely clear if the package actually includes all of these cards, or if the picture of a card with a question mark on it that can be seen on the "Pokémon Custom Pack" box is meant to suggest that customers might only receive a random selection from these.

While the box suggests that the phone may have a Poké Ball style red and white design, no actual images of the phone itself have been shown at this point in time. It's possible that this phone may also include its own special theme, with unique ringtones and wallpapers, however there's nothing to confirm that at this stage.

A number of different outlets have reported that the new phone will be released this weekend, at 5pm on Sunday April 24th (GMT+9, Korea Standard Time), based on the countdown timer that customers can subscribe to on the website. However, nothing on that page explicitly says this will actually be the launch date, and it seems quite likely that this countdown is for the release of additional information about this special collaboration product, including both the actual design of the phone itself, and the retail price for the set.

While there's been no official word either way at the time of writing, this phone will most likely only receive an official release in South Korea. Fans intending to use something like a drop-shipping service to obtain the phone internationally should carefully check before ordering that the phone will actually support network frequencies in their home country.
The Original Pokémon Wiki
40,000+ pages
Over 3m edits
Browse now
Community