The Pokémon Company International has announced that the Pokémon Trading Card Game Battle Academy, which received the Game of the Year award at The Toy Association's 2021 Toy of the Year Awards, will be receiving a new updated edition in 2022. Two new V Battle Decks, focused on Lycanroc V and Corviknight V, will also be releasing in the first quarter of 2022. 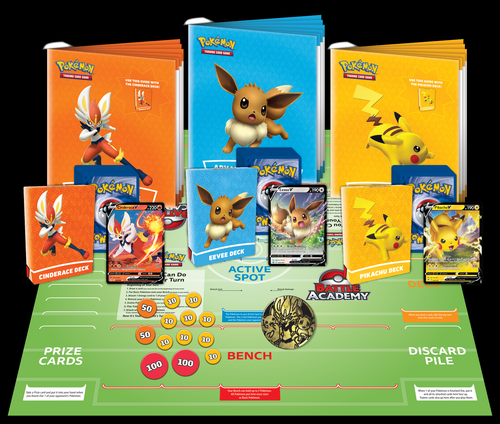 The original Battle Academy featured Pokémon with the Pokémon-GX mechanic, first introduced in the Sun & Moon expansion. The new edition replaces this with the newer Pokémon V gameplay mechanic from the Sword & Shield series. It also includes an updated lineup of fan-favorite Pokémon headlining the three included decks, including Pikachu, Eevee, and Cinderace.

The updated Battle Academy will release sometime in 2022, though no firm date has yet been given for release.

Lycanroc V and Corviknight V Battle Decks
V Battle Decks are designed for players wanting to get deeper into the game and improve their skills with the game after cutting their teeth on the Pokémon TCG with the Battle Academy. Players can use them either on their own, or as an extension of the decks included in the Battle Academy, giving new players a guided pathway to developing the deckbuilding skills needed for higher level play.

Each V Battle Deck provides everything a Trainer needs to play a game, including one 60-card deck and gameplay accessories. V Battle Decks replaced set-related Theme Decks in early 2021, with the final Theme Decks being released for the Vivid Voltage expansion in November 2020.

The new Lycanroc V and Corviknight V Battle Decks will be arriving on store shelves worldwide in the first quarter of 2022. They will come both individually, as well as in a bundle set that includes both decks, as well as an eight additional Trainer cards to help enhance the decks.