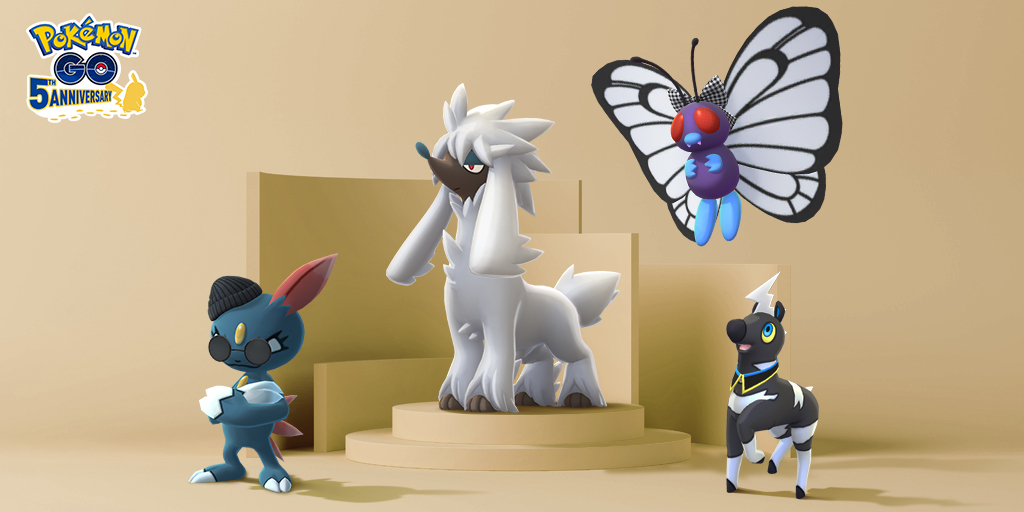 Niantic has announced details of the Pokémon GO Fashion Week event, which will be taking place from September 21, 2021, at 10:00 a.m. to September 28, 2021, at 8:00 p.m. local time. During the event, trainers can look forward to Pokémon like Butterfree, Sneasel, and Blitzle wearing fashionable costumes for the first time. Costumed Pokémon that starred during last year's Fashion Week event, including Smoochum, Kirlia, Shinx, and Croagunk, will be making a return as well. In celebration of the event, the shop will also be having a first-of-its-kind sale on select avatar items.

Furfrou will also be making its Pokémon GO debut as part of Fashion Week, with some of its different forms being available only in certain regions around the world.


Furfrou's debut in Pokémon GO also marks the arrival of a new feature that will allow you to change the forms of certain Pokémon. Follow the steps below to change Furfrou’s Trim:
In addition to Furfrou, costumed Pokémon like Kirlia, Blitzle, and Croagunk will be appearing in the wild. Butterfree may occasionally appear in the wild. Costumed Pokémon like Sneasel and Shinx will be appearing in one-star raids, and costumed Butterfree and Kirlia will be appearing in three-star raids. The Pokémon appearing in five-star raids and in Mega Raids will not change from what has been announced previously. Alolan and Galarian Meowth, Smoochum, and Shinx in fashionable costumes will be hatching from 7 km Eggs. If you're lucky, you might encounter Shiny variants of Butterfree, Sneasel, Smoochum, Kirlia, Shinx, Croagunk, or Blitzle—all wearing fashionable costumes. Shiny Blitzle without a costume will debut after Fashion Week has concluded, but you won't see Blitzle in the wild very often.

Fashionable Trainers with fashionable Pokémon and more will be appearing at PokéStops throughout the event. Challenge these Trainers to earn rewards. Complete Timed Research for a chance to earn encounters with fashionable event-themed Pokémon. You can also earn an exclusive Furfrou Wig avatar item as a final reward. The Furfrou Wig will also be available for purchase in the shop after the event is over, beginning September 29, 2021, at 1:00 p.m. PDT (GMT –7).

Trainers can complete Special Research during this event to earn an encounter with the beautifully voiced Meloetta. If you have already accessed the Pokémon GO Fest 2021 exclusive Special Research, completing this new Special Research will instead earn you Meloetta Candy. Starting on September 20, 2021, at 1:00 p.m. PDT (GMT –7), Fashion Week avatar items—like Hoopa Bangles—will be available in the shop. Certain avatar items will be on sale for a limited time, so make sure to check out the shop and find your next fashionable outfit at a bargain.

The next part of the Season of Mischief Special Research story, Misunderstood Mischief, will unlock during this event, where trainers can help Professor Willow study up on how Pokémon like Furfrou change their appearances.