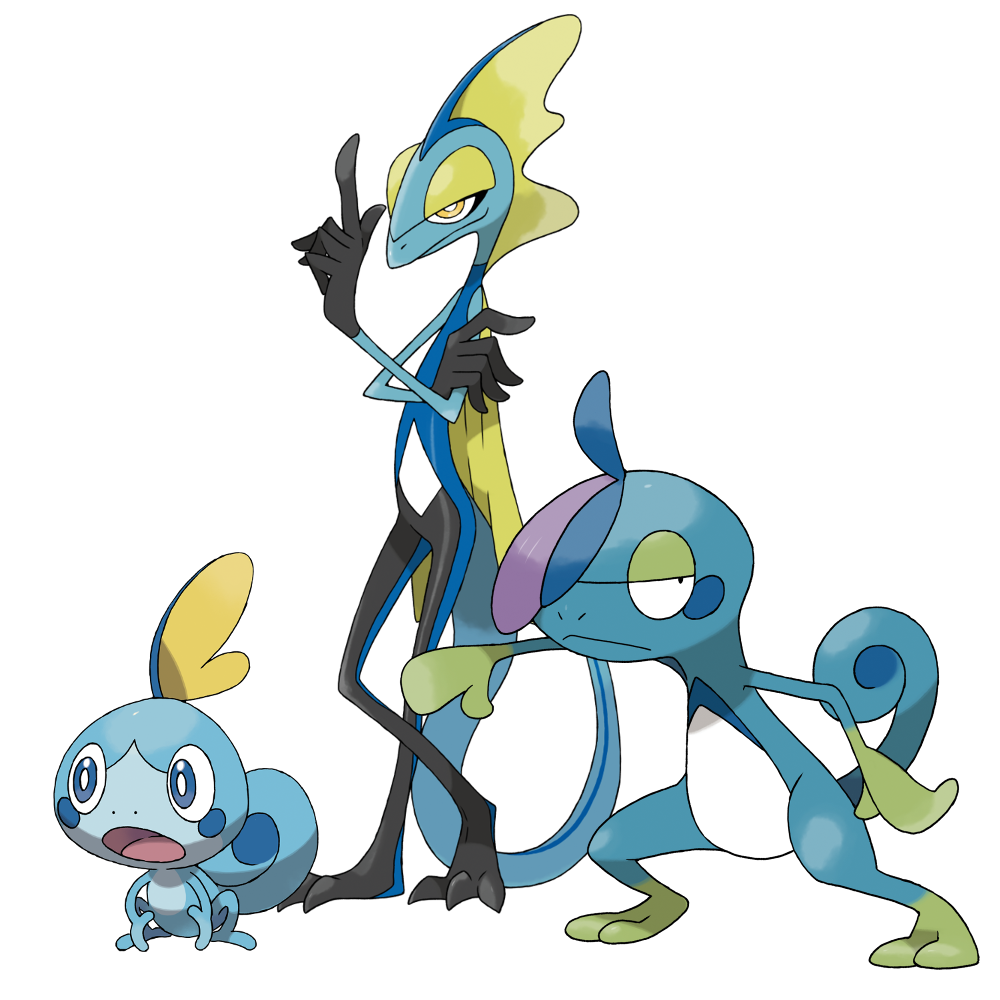 I've always been fascinated by reptiles. It's a fantastically diverse group of animals, coming in all different shapes, sizes, and colors. Many even change colors based on environmental factors or their life stage. The most famous example of this is of course the chameleon, which is actually an entire family of lizards scientifically known as Chamaeleonidae. Sobble and its relatives clearly take inspiration from these lizards, most closely resembling the veiled chameleon (Chamaeleo calyptratus).

Chameleons change their colors for a variety of reasons. Camouflage plays a role, but typically their relaxed, mottled or striped green coloration works well enough for this given their arboreal lifestyle. Perhaps the most important reason chameleons shift their color is for heat regulation. If one feels too cold, it will change to a darker color to absorb more heat, and if it's too hot it will shift to a lighter color to absorb less heat. Chameleons also use their colors to send signals to others of their species. An aggressive individual might display bright colors, and a rival may turn dark to indicate that it's submitting.

Sobble's ability to turn completely invisible is likely derived from the chameleon's ability to change its color, but of course it has been exaggerated in classic Pokémon fashion. Despite this, the reasons Sobble and its evolutions use this color changing ability are not too far removed from their reptilian origins. The crybaby Sobble will disappear when it becomes scared, similar to how many animals are able to change their color to hide from predators. Like a human teenager, Drizzile begins experimenting with its style, showing off some green and purple in its design. Perhaps this display was inspired by a brightly-colored, moody chameleon telling others to get out of its room, or rather its tree. The smooth assassin Inteleon returns to a more modest color scheme and uses its ability to disappear for stealth once again. However, it's no scared Sobble anymore, it prefers to sneak up on enemies and attack from a distance, like the real life predatory chameleon and its projectile tongue.

While the similarities Inteleon has to chameleons are apparent, with them even being a likely influence on its name, this Pokémon also appears to draw inspiration from at least two other types of lizards as well. Its lanky body and rounded head crest are reminiscent of basilisk lizards of the genus Basiliscus. These animals are famous for their ability to run on top of water. It's fitting a lizard with such an affinity for water would be used as inspiration for this reptilian Water type Pokémon.

Basilisks are able to perform this feat thanks to special fringes lining their toes that fold out when they're ready to run. When their foot slaps against the water, the increased surface area provided by these fringes pushes a pocket of air down into the water. This gives them enough buoyancy to rest on the surface long enough to push off into their next stride. It's a delicate process that they've been recorded to maintain for up to about three seconds, traveling up to 15 feet this way. Then they resort to swimming until they are safe from whatever predator they were attempting to escape from.

Inteleon seems to draw on traits of another lizard with a unique method of travel. The way Inteleon pulls out its cape-like membrane to glide is nearly identical to that of the flying lizards of the genus Draco. These lizards boast thin membranes, called patagia, that allow them to glide from tree to tree. These wing-like structures are what inspired their genus name, which refers to mythological dragons, and may have contributed to the ancient legends of these flying creatures. Like the Pokémon they inspired, Draco lizards are not capable of true flight, but have been recorded gliding up to 200 feet. This is approximately 300 times their body length! Bats, flying squirrels, sugar gliders, and pterosaurs all have or had patagia as well, and bats and pterosaurs have evolved the ability to fly using them.

As Inteleon's Pokédex entry claims, the Secret Agent Pokémon has "many hidden capabilities." From color changing stealth to soaring through the air, our humble friend Sobble and its flamboyant relatives have a lot of spectacular abilities to offer, all inspired by the amazingly diverse world of real life lizards!

Did you enjoy this article? Did I miss anything during my research? Maybe you have suggestions for future topics in this series? You can let me know by commenting on this article!
The Original Pokémon Wiki
40,000+ pages
Over 3m edits
Browse now
Community